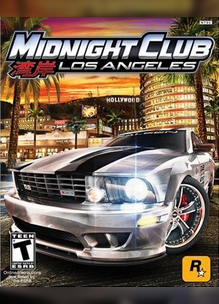 Midnight Club: Los Angeles was relisted on Xbox 360 on April 27th, 2021. It is unclear why the game returned at this point, and only on Xbox 360. It is possible this relisting was made in error, although one week after its return we found no reports of automatic refunds being issued and the game disappearing from owners’ libraries. As of May 4th, 2021 the game had not returned on PlayStation 3.

Whether driving by the beach or beating the competition by cutting through a parking garage at 200 mph, Midnight Club: Los Angeles provides a seamless, breathtaking environment for everyone who loves to compete. With no load times, no tracks, and no rules, the game allows players to race who they want, when they want, and where they want in an unbelievable recreation of Los Angeles. A racing game is nothing without the great cars and Midnight Club: Los Angeles allows extensive customization of vehicles for both performance and appearance. Players can now fully personalize their officially licensed imports, tuners, classic muscle cars and motorcycles both inside and out with a dizzying array of licensed rims, spoilers, interior gauges, tires and more.