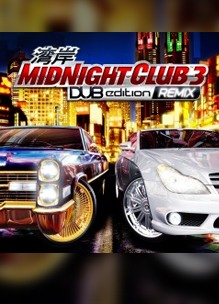 Midnight Club 3: Dub Edition Remix is a revised edition of Midnight Club 3: Dub Edition. It is available as a Greatest Hits release on PlayStation 2 and a Platinum Hits release on Xbox (the remix edition of the game is not available for the PlayStation Portable). The game was released on March 12, 2006 or exactly eleven months after the original version’s release. It was released on December 19, 2012 on PlayStation Network for the PS3; However, it was removed after a passing of time due to licensing issues.

The following features were added in Remix: