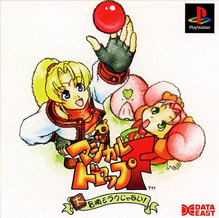 Magical Drop F was delisted from the US PlayStation Store the week of August 13th, 2012 alongside other MonkeyPaw Games releases: Kyuiin, Yakiniku Bugyou and Arcade Hits: Magical Drop. The reason is unclear but MonkeyPaw has stated numerous times on twitter that these games were “delisted by Sony and won’t be coming back” and that the delistings were “permanent” as far as they were concerned.

“Magical Drop is a long-running arcade puzzle series in Japan, and a major influence on subsequent puzzle games such as Critter Crunch and Astro Pop. This was Data East’s entry into the versus puzzle genre, popularized by Nintendo’s Dr. Mario and Compile’s Puyo Puyo.

Overall, the game is the most expansive in the series, and is most notable for its RPG mode, which has a fun, light story (for those who speak Japanese). The game’s characters are all based on Tarot cards, though their personalities don’t necessarily present an accurate reading of the Tarot. As a little tidbit of trivia, the tiny avatar that actually grabs and releases the drops is always The Fool.”

“This classic stack puzzler was one of the most original of its era.Magical Drop F was a Data East jewel that never saw Western markets.  The Magical Drop series has challenged generations of gamers but Magical Drop F is different from previous incarnations in a number of ways.”