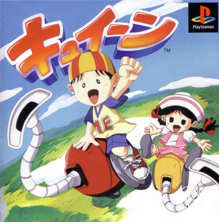 Kyuiin was delisted from the US PlayStation Store the week of August 13th, 2012 alongside other MonkeyPaw Games releases: Yakiniku Bugyou, Arcade Hits: Magical Drop and Magical Drop F. The reason is unclear but MonkeyPaw has stated numerous times on twitter that these games were “delisted by Sony and won’t be coming back” and that the delistings were “permanent” as far as they were concerned.

“Some games are wackier than others. Kyuiin falls into the weird and wonderful column. Kyuiin delivers a highly creative and very clean horizontal scroller. Your flying machine is a vacuum cleaner.”

“As a boy reads from his favorite fairy tale, a fairy appears from the book and requests his help against an evil wizard who has been tampering with the stories. When the fairy inquires about the method of travel, the innovative lad looks around the room and notices a handy vacuum cleaner. In a whirl, he’s off on his new flying vacuum sucking in evil!

Whenever you suck something inside your vacuum, a meter will build up. The purpose of this is to use the sucked up enemies as a desperation attack against your foes when you find yourself in an uncomfortable position. When this weapon is used, all the collected enemies and items that are in the bag are spit out again in a destructive light beam that destroys everything in it’s path.

Graphically, all the enemies, bullets, explosions are beautifully designed sprites, which constantly scale, rotate and pulsate. The game has a very lively feel. Enjoy the innovative, creative fun that this Japanese gem provides. Look for it in the PlayStation® Network Store under the PSone Import Games category.”