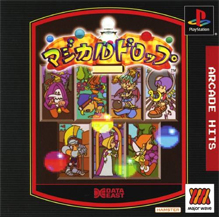 Arcade Hits: Magical Drop was delisted from the US PlayStation Store the week of August 13th, 2012 alongside other MonkeyPaw Games releases: Kyuiin, Yakiniku Bugyou and Magical Drop F. The reason is unclear but MonkeyPaw has stated numerous times on twitter that these games were “delisted by Sony and won’t be coming back” and that the delistings were “permanent” as far as they were concerned.

“Magical Drop is a Tetris-inspired puzzle game featuring characters from tarot cards as players. A stack of random colored bubbles descends from the top. Players pull bubbles down, shifting the colors and toss them back up into like-colored bubbles, making the whole chain disappear.

Chains are formed either when a single drop causes a chain reaction or when more than one group of bubbles is destroyed in quick succession. A player is defeated when his bubbles hit the bottom. In two-player mode, you really get the competitive rage going as you fight your friends for bubble supremacy.”

“Magical Drop (released in US Arcades as Chain Reaction) is the first in a series of fast-paced puzzle arcade games by Data East. This game got ported to a LOT of home consoles, but never found a release in the US… until the fine people at MonkeyPaw got a hold of it, that is. Now it’s here in all its mid-90s puzzling glory, playable for the first time on your PSP.”