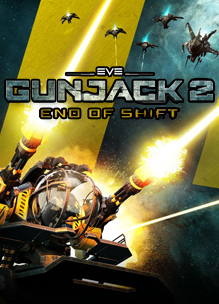 Fearless gunjacks – all good things come to an end, even on the fringes of outer space. Today, we have begun the process of discontinuing support for Gunjack 2: End of Shift to focus CCP Games` efforts and resources on new developments in our evolving portfolio of EVE Universe titles.

We are incredibly proud of what we accomplished with Gunjack 2: End of Shift and want to extend our deep appreciation to all our players for their support throughout the game`s lifecycle.

For the time being, you won`t see any effect if you own a copy of the game. The game will continue to be playable with our servers remaining active until date August 5th 2022.

Thank you for being a part of Gunjack 2: End of Shift. We look forward to the next chapter in the EVE Universe and hope you’ll be a part of it and continue the journey with us.

Immerse yourself in the all-new, cinematic VR world of Gunjack 2: End of Shift from CCP Games. This sequel to the critically acclaimed and best-selling VR shooter set in the EVE universe, Gunjack, comes to the Samsung Gear VR, transporting you to the dangerous Outer Ring of New Eden.

Everyone fights in New Eden. Some fight for power. Others for money. But out here, on the fringes of space, most fight simply to see another day. Far from the comforts of civilization, the vast mining rig, Kubera, is your home. As a turret operator charged with destroying waves of attackers, you stand united with your crew mates in the defense of the rig.