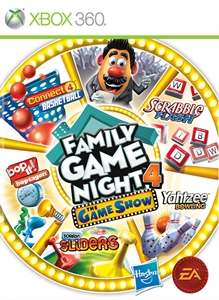 Family Game Night 4: The Game Show was delisted from Xbox Live Games on Demand between February 12th and October 22nd, 2014. Electronic Arts held the Hasbro license from 2007 to 2014 and released several games based on their board games on numerous platforms. Ubisoft announced in August of 2014 that it was the new license holder for Hasbro properties resulting in the delisting of this and most other EA published titles.

“Your living room becomes the board and you are the controller in this larger than life experience. Now you’re part of the action! In FAMILY GAME NIGHT 4: The Game Show, you can experience the fun and excitement of the popular TV show right in your own living room!

This time you’re playing with larger-than-life pieces in re-imagined versions of your favorite Hasbro games. CONNECT 4 Basketball is more fun than ever as you shoot hoops to get 4 balls in a row and YAHTZEE! Bowling puts a whole new spin on the popular dice game. You’ll also find fun new versions of SCRABBLE Flash, SORRY! Sliders, and BOP-IT Boptagon, and win MONOPOLY Crazy Cash, just like the game show! Play with friends and family and compete to prove your family is the best!“