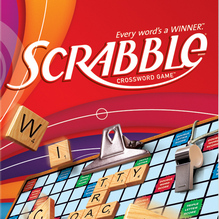 Scrabble was delisted from PlayStation Network for PlayStation Portable. An exact or approximate date of delisting is unknown but it was presumably between February and October of 2014 alongside other Hasbro titles from Electronic Arts.

EA held the Hasbro license from 2007 to 2014 and released several games based on their board games on numerous platforms. Ubisoft announced in August of 2014 that it was the new license holder for Hasbro properties resulting in the delisting of this and most other EA published titles.

“SCRABBLE on the Nintendo DS and PSP will offer something for every crossword puzzle fan with three modes of play including:

SLAM will be available for the first time digitally on the handheld versions of SCRABBLE. With six difficulty levels, SCRABBLE will serve up a Training mode with six training exercises that enable new or rusty players to polish their skills before their first big showdown. SCRABBLE comes loaded with extras such as the SCRABBLE Word Finder and Wi-Fi multiplayer capability (both single and multi-cart play). Debuting in March 2009, the Nintendo DS and PSP games are expected to be rated “E” for Everyone and carry an MSRP of $29.99.“