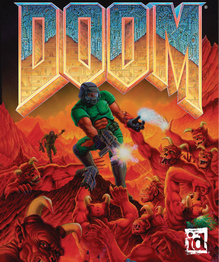 “You’re a Marine stationed on Mars when a military experiment goes wrong. Your mission – blast your way to freedom through the classic world of DOOM. Face off against Hell’s army including stampeding demons and undead Marines, and lay waste to rooms of monsters with the infamous BFG 9000 and an arsenal of classic weapons. Then, take the deathmatch online via Live and battle your friends for dominance of the leaderboards, or team-up with a friend in co-op.“