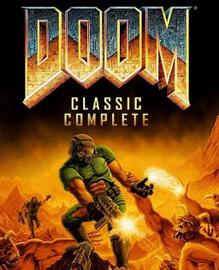 As of late July 2019 the compilation release was still available on the PlayStation 3 exclusively in North America but was delisted no later than August 1st.

“Dust off your BFG and ready yourself for the definitive battle against the forces of Hell. DOOM Classic Complete includes the seminal shooters that laid the ground work for the entire first-person shooter genre: DOOM (with the additional episode ‘Thy Flesh Consumed’), DOOM II (including the additional episodes ‘No Rest for the Living’ and ‘The Master Levels’) and Final DOOM.“