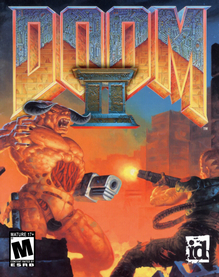 “To save Earth, you must descend into the stygian depths of hell. Battle nastier, deadlier demons and monsters with your trusty Super Shotgun. Survive more mind-blowing explosions and take part in the bloodiest, fiercest, most awesome blastfest ever. Recruit your friends and plow through 9 all-new levels in the new episode, No Rest for the Living! Play solo or multiplayer over Xbox LIVE with up to 4 players. DOOM II for XBLA includes split screen co-op over Xbox LIVE, Game clips, 5.1 Surround Sound, enhanced graphics, and HD display support.“