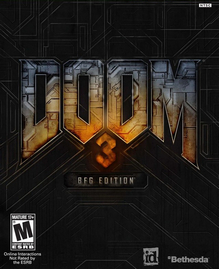 “DOOM 3 BFG Edition is the ultimate collection of groundbreaking games that defined the first person shooter. It includes DOOM, DOOM II, DOOM 3, and DOOM 3: Resurrection of Evil, as well as the ‘Lost Mission’. All DOOM 3 content has been re-mastered in stunning 3D for an even more terrifying FPS experience.“