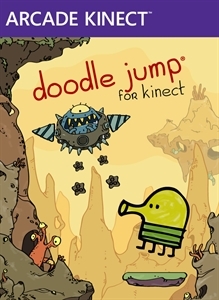 Doodle Jump for Kinect was delisted from Xbox 360 in February of 2019 according to reporting from TrueAchievements.com. It was delisted alongside another title from D3 Publisher, Mad Tracks, suggesting the removal may have been caused by the publisher deciding not to renew licensing or upkeep for the games.

“Doodle Jump, the most addictive mobile platformer ever, comes to Xbox LIVE Arcade with amazing new Kinect-only features. Guide Doodle the Doodler on a journey up, up, up, bouncing from platform to platform, past monsters, black holes and other obstacles. Players step left and right to move, point to blast nose balls at baddies, flap their arms to fly and more with other unique gesture controls.

Doodle Jump for Kinect introduces 3 all-new worlds, treacherous bosses, and unique power-ups. Get off your couch and get your friends and family together to see who can score the most points and collect the most stars.“