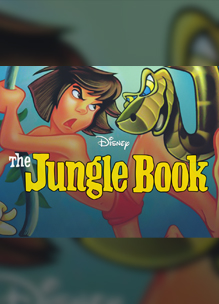 Disney’s The Jungle Book was delisted from Steam on July 3rd, 2019. This was around the same time that Aladdin and The Lion King were delisted on Steam and GOG.com ahead of the October 2019 release of the Disney Classic Games collection. The Jungle Book remained available on GOG.com until November 25th, 2021, two days after the release of the “Jungle Book and MORE Aladdin Pack” for the Steam, Nintendo Switch, and Xbox versions of the Disney Classic Games collection. As of this writing, the Jungle Book DLC was not yet available on PlayStation 4 or GOG.com but was expected soon.

Get down to the bare necessities of life… Play as the man-cub, Mowgli, an orphan raised by a pack of wolves in the jungle. No parents. No school. No problems. Great life, huh?

Except, there’s a rumour that Shere Khan, the man-eating tiger is coming after you. So now you’ve got to sneak, swing and swoop your way through the jungle, catch the tiger by the tail and reach the safety of the man-village.

To do this, you have to get the hang of incredibly tricky vines, neutralize venom balls, dodge coconut-throwing monkeys and fire off bananas at any scorpion, vampire bat or crazy ape that gets in your way. So eat your bananas and get ready – it’s a jungle out there!

Thanks to Steve for submitting this game to the site