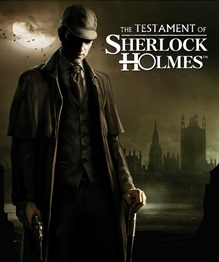 The Testament of Sherlock Holmes was delisted from Xbox 360 in January of 2019 according to reporting from TrueAchievements.com. It was presumably delisted on PlayStation 3 around the same time. At some point in 2015 the publisher of the Steam version changed hands from Focus Home Interactive to Frogwares, also the game’s developer.

Despite this earlier delisting The Testament of Sherlock Holmes was included in Frogwares’ September 2019 announcement regarding their titles as published by Focus Home Interactive. Its inclusion could indicate that Focus Home had only recently made a formal break from the title and the developer, barring the console releases from returning to sale.

“Forget everything you thought you knew and discover a Sherlock Holmes darker than ever. The detective’s reputation on the verge of being ruined, the admiration of Doctor Watson toward him is starting to fade and change into hatred as he witnesses his friend committing reprehensible acts.

The Testament of Sherlock Holmes uses advanced visual technology in an all-new game engine to provide players unprecedented depth and nuance in their examination and analysis of crime scenes, critical clues, and persons of interest. Through use of elaborately conceived set pieces, every inch of the mystery can be explored. The game’s characters have been comprehensively motion captured, further enhancing the narrative immersion.

All of this comes in addition to a new light and shadow system, various post-process image effects, high-quality voiceovers, and expert cinematography, making The Testament of Sherlock Holmes the best-looking, most intricately detailed interactive Sherlock Holmes adventure ever!“