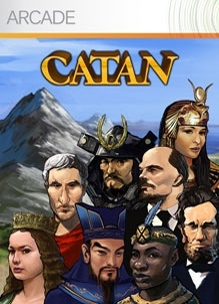 Catan was likely delisted on Xbox 360 in June of 2014 based on reporting by TrueAchievements.com. Although their article from June 2nd, 2014 is titled ‘Catan Delisted from the XBL Marketplace’ the contents of the post does not relate to the game’s removal. However, the timing seems appropriate as the last Archive.org capture that shows the game was available dates back to February 12th, 2014.

The cause for the delisting is uncertain but appears to be related to expired licensing of the ‘Settlers of Catan’ property created by Klaus Teuber and owned by Catan GmbH. Since 2013 United Soft Media has maintained several Catan releases across Steam, the web, Android, iOS, and Nintendo Switch. In 2021 Catan GmbH also announced upcoming console releases for PlayStation and Xbox platforms created alongside Dovetail Games.

Catan, based on the best-selling board game “The Settlers of Catan,” puts you in the role of a colonist on a newly discovered imaginary island. Vie for control over the island’s territory and resources against computer gameplay that will challenge all skill levels — even the experts! Catan is addictive fun for all ages, taking just minutes to learn and a lifetime to master!

Thanks to Jagger for submitting this game to the site