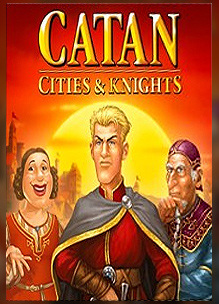 Catan – Cities & Knights was removed from sale on the Catan.com homepage between February 17th and 21st, 2013 based on Archive.org captures. The game was superseded by Catan: Creator’s Edition but this fact was not added to the game’s homepage until some time between July and August of 2013. Unlike Creator’s Edition, Cities & Knights was a digital exclusive and did not receive a retail release.

Finally, the most popular Catan expansion is also available as a PC adaptation with strong computer opponents. It took a long time to fine-tune the artificial intelligence of the computer opponents so that the game would be challenging also for experienced Catan players. For this reason, Klaus Teuber as the designer of the original board game was closely involved in the development, and together with the Catan Online World team the new version was created.

“Catan – Cities & Knights” is a thrilling gaming experience for everyone – fans since day one and first-time players alike.

There are a total of eight different computer opponents to choose from. The extensive campaign includes many varied scenarios, from the simple Base Game to diverse Seafarers scenarios (Oceania and Heading for New Shores, among others) to Cities & Knights scenarios in combination with Seafarers (Greater Catan C&K, among others).

The individual scenarios of the campaign can be activated step by step; afterwards, you can also play the scenarios individually, using different options such as “Friendly Robber” or “Card Stack”. Spoken story sequences develop the thread of the campaign story. An interactive tutorial helps newcomers get started with the game, and for the skilled player extensive game statistics are available.