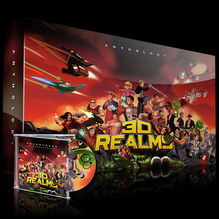 The 3D Realms Anthology was removed from sale on Steam and direct from 3D Realms on December 31st, 2015. The majority of the included titles were later made available to download.

“The 3D Realms Anthology is a download-only 32-game collection – that’s the entire 3D Realms library (excluding Max Payne and Prey) brought together by a brand-new, custom-made Anthology launcher built to run on Windows.

Anthology also includes a completely original re-rockestarted soundtrack, with 9 remade tracks from a range of classic 3D Realms titles such as Duke Nukem II, Wacky Wheels, Bio Menace, Major Stryker and Shadow Warrior. Every game in the collection is DRM-free and has partial controller support. This product is only available via download.“