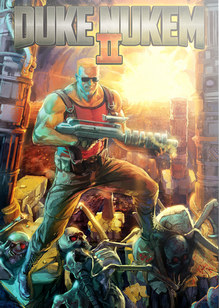 Duke Nukem 2 was delisted on Steam and GOG.com on December 31st, 2015. On GOG.com it was included in a bundle with Duke Nukem 1 and 2. The game on Desura was rendered delisted no later than October 25th, 2016 when OneClick purchased the site and took it offline.

“Our hero is ready for action. Duke must escape his alien prison cell, then battle to end the hideous plans of the Rigelatins.

For fans of the original Duke Nukem, your favorite touches return: soda cans for health, turkey for food, spy cameras watching your every move, boxes you can destroy for bonuses and surprises, and more. Duke still flips, and he walks hand over hand across pipes, chains and ropes, with the new ability of shooting downward while doing so. Duke can also crouch, duck, and shoot upward.

I’ll Be Back Absent from Duke Nukem II’s original release, Duke has been retrofitted with sun glasses for a third dimension of coolness in a two-dimensional world.

Don’t Try This at Home: Always the consummate professional, Duke must collect power-ups, fly space fighters, and drink six-packs to escape the clutches of his evil alien captors.