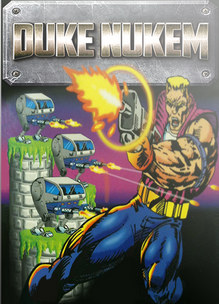 Duke Nukem was delisted on Steam and GOG.com on December 31st, 2015. On GOG.com it was included in a bundle with Duke Nukem 1 and 2.  The game on Desura was rendered delisted no later than October 25th, 2016 when OneClick purchased the site and took it offline.

“The third chapter in the series, and the first with a 3D perspective (the original Duke Nukem and the sequel, Duke Nukem II, are side scrolling platform games). This game, set sometime in the early 21st century, begins in a ravaged LA, which was overtaken by aliens while you were abducted during Duke Nukem II. Duke, upon returning to Earth, finds himself with another mess to clean up, and another alien race that needs exterminating.

Duke is a can-do hero who realizes that sometimes innocent people have to die in order to save Earth, so accuracy of gunfire is not a real concern to him.“

Always bet on Duke in his very own Mod Spotlight. Download Fan-Made Mods! If the base game isn’t enough for you, check out some of the great mods that other gamers have made!“