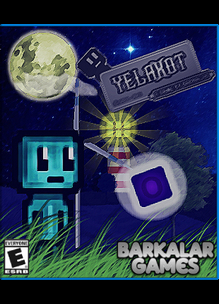 Yelaxot and Professor Nasty Time: The Stupidly Unfair Test Simulator 2016 were both removed from Steam on May 9th, 2017. Ryan Miller from developer/publisher Barkalar Games originally explained his decision to remove the games and their DLC in May of 2017 but he has since deleted that original post.

Years later, in September of 2018, he returned to the Steam Community forums to offer a much longer explanation for his decision. A paraphrased selection of quotes from that post follows:

If you don’t remember me, my name is Ryan Miller and I am known as the solo developer for Yelaxot and Professor Nasty Time here on Steam. They aren’t my only games, just the only games I bothered to release on the Steam store at that time. All Barkalar Games content was eventually taken down in 2017. Since then, I have noticed a good amount of messages and comments (even to this day) where people question why they’re no longer on Steam, many even disappointed.

The reason I’m taking time to speak about is because I never truly clarified everything completely from my perspective and I also have noticed a some people making their accusations about the decision I made to take the games down from Steam. They’re all incorrect and probably just confuse some people. For example “Valve took the games down!”, “He wasn’t proud of his work!”, etc. None of that is even remotely true. I am the one that made the decision to have all Barkalar Games products retired from the Steam store. According to Valve’s message after making the request, I will always have the option to have my retired work made public again and also release new titles on Steam if I’d like. My business relationship with Valve was always perfectly fine. No negativity whatsoever… There are only 2 real reasons I made the decision. And no, I will never make a return to this store nor will I ever release any projects that I complete in the future here.

Why? Because even though this Steam is undoubtedly the biggest game distribution platform in the world (as far as I know…), the unfortunate truth is there is little to no benefit to distributing your work on the Steam store UNLESS you’re a popular AAA company or Valve. It’s easy for a person to think my decision was was poor, but what’s really the difference between being on a store that buries you beneath AAA titles and the few indie titles that managed to gain a popular status which many people already know about versus not being on the store at all? There is no difference.

The second reason is literally the same exact reason why I almost didn’t want to release anything on Steam in the first place. The community… Hear me out on this. I’m not saying this to attack any of you here. You all seem like genuinely nice people. Throughout my years on Steam, I have met and spoken with hundreds to thousands of nice, normal individuals. And because you all seem sensible, you more than likely already ready know where I’m coming from when I say this. I have ABSOLUTELY NO respect for the gaming community. Again, I’m not saying that to target everyone, but the gaming community is full of some of the trashiest people you could ever meet in your entire life.

And in the end, I just decided I’m not going to sit back and watch my work’s image get tarnished by a bunch of random trolls I don’t even know because they have nothing better to do than to make jokes and try and ruin someone else’s success with gibberish and overused jokes. I don’t have the patience for that kind of behavior and should not have to deal with it. So the best way I figured would be to not deal with it at all and force everyone to come to my own platform. I want people to view my work and judge based on what they experience and see, not turn away from it just because they see some trolls blurting a bunch of nonsense.

As of this writing, Yelaxot remains available and DRM-free from Barkalar-Games.com, hosted through the Humble Bundle Store.

A beautiful, huge, mysterious world known as “Yelaxot” with many wonders to explore! The world of Yelaxot is now slowly fading away along with all of the existing life on it due to the loss of it’s ancient power source. Explore the entire world with Zayten and Dentia as you solve puzzles, fulfill quests, discover secrets, and reverse the world to open new possibilities.