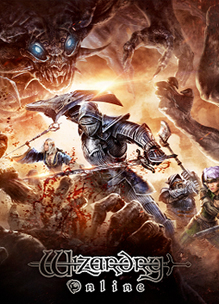 Wizardry Online was shut down on July 31st, 2014 in Europe and North America. It was likely shut down prior to this in Japan. Senior Producer at SOE, Todd Carson, announced the plans to shut down the Western releases of the game on January 23rd, 2014:

It is with sadness that I share the unfortunate news that we have mutually agreed with our partners at Gamepot to sunset Wizardry Online on July 31, 2014. The opportunity to bring a new hardcore fantasy MMORPG based on the Wizardry franchise to players across North America was a great honor, and we’ve had some fantastic battles and experiences together in the game.

We will provide details on upcoming sunset activities soon, but wanted to alert you of the sunset now so you could maximize your experiences during the remaining time left in the game.

For current Wizardry Online members, we will be upgrading your membership to SOE’s new All Access membership. Under this new All Access plan, you will be able to continue to enjoy membership benefits in Wizardry Online until it sunsets, in addition to having top tier access in SOE’s other membership games. We sincerely hope that by upgrading your membership, you’ll be able to explore our other games to see if one is a fit for you moving forward. For more information, visit the FAQ here: https://forums.station.sony.com/soe…vised-soe-all-access-program-faq.11500063040/

Thank you again for the memories and your support!

Around the same date, Sony Online Entertainment announced that three other MMO titles would be shutting down alongside Wizardry Online; Free Realms, Star Wars: Clone Wars Adventures, and Vanguard: Saga of Heroes. In a statement to Kotaku at the time, SOE’s Senior Director of Global Communications, Michele Cagle, cited the “need to refocus […] resources in other areas” as the cause for these closures.

Fan efforts to resurrect Wizardry Online began in 2019 and have resulted in a functional although incomplete development server as of 2020.

Wizardry Online is the most hardcore fantasy MMO ever created. The difficulty level is insane. The dungeons are brutal. There is no auto-healing. You will earn your levels. Your crimes taint your soul. Your allies could betray you at any moment. And when you die, you die forever.

Whether your passion is adventuring, engaging in massive battles with ferocious monsters or hunting your fellow players, Wizardry Online offers is your game. Are you ready for the challenge?

Dwarves
Dwarves have impressive strength and durable bodies which makes them best suited for the fighter class. In addition, their piety makes them well-suited to play the priest class.

Elves
Elves are oriented towards mage and priest classes due to their high intelligence and piety. Their power and vitality are low, which makes them ill-suited for the fighter class.

Gnomes
Gnomes make excellent priests or fighters. They are surprisingly unintelligent and unlucky, making them poor mages and thieves.

Humans
Humans are suitable for all classes. While they do not have any outstanding characteristics, they also have no noticeable faults. They are an excellent, well-rounded choice.

Porkul
Fast and lucky, Porkul excel in the thief class. However, they lack a variety of features which makes it difficult for them to play any other class.

Thief
Thieves are a technical class that takes intelligence and proper technique to use effectively. When played correctly, thieves can be a more proficient killer than the fighter. While they are able to speedily dispatch foes, they are lightly armored and must be protected during battles.

Priest
Priests are needed in each party. They specialize in healing and support magic. Their benefit to the entire party makes priests essential to survival during long adventures.

Mage
Though limited by their reliance on magic points and the inability to wear heavy armor, mages boast tremendous firepower which allows a party to take down their enemies incredibly quickly.

Fighter
Fighters are easy to play due to their high hit points, attack and defense characteristics. However, they cannot use magic and have trouble defending against magic attacks.