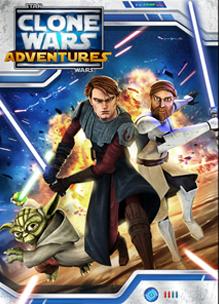 Steve George, SOE Producer, posted the following announcement to the game’s homepage in January of 2014:

It is with sadness that I announce the news that Star Wars: Clone Wars Adventures will end March 31, 2014. We’ve had many incredible experiences with you over the years. We’ve fought epic battles and made unbelievable memories. It was a very difficult decision to make, but we knew this day would come eventually.

Most importantly, I want to thank all of the players for their time and commitment to the game. You have made this Star Wars experience truly unforgettable. Stay tuned here for more details on what the next two months will look like.

Work on a fan-run emulator for the game began in 2014 with some contributors recreating assets entirely and moving the game into the Unity 3D engine. As of 2020 a closed testing build of the Clone Wars Adventures Emulator (CWAEmu) is available for registered members.

Clone Wars Adventures is a brand-new action-packed online game where you can experience the thrills and excitement of Star Wars®: The Clone Wars™ first hand. Battle it out with your friends alongside your favorite Star Wars characters like Anakin Skywalker™, Obi-Wan Kenobi™, Yoda™, and Ahsoka Tano.

It’s easy to get started; just launch your web browser, sign up for an account and you’re in within minutes! Play as a Jedi, Padawan or a Clone Trooper.

Speed through space in Starfighter™, take out waves of Battle Droids™ in Republic Defender or test your brain with Droid™ Programming puzzles.

Pick up your own protocol Droid™ or show off your style with legendary Star Wars outfits and items. Check up on your friends through their profile page or invite them to your house party. Hang out and chat or just brag about your latest trophies.  There’s no place online like Clone Wars Adventures.

Clone Wars Adventures, the Force is in you.