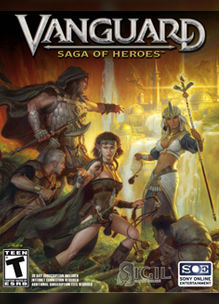 I’m sad to announce that on July 31, 2014 we will sunset one of our longest-running games, Vanguard: Saga of Heroes. This decision was not easy — we took much time and consideration before deciding to move forward with this plan.

But here’s the deal…player population numbers have decreased making it difficult to justify the resources needed to support and update this game. This is an older game and we’re experiencing more and more technical challenges to continue running and updating it in a way you deserve. Simply put, these are issues that cannot be fixed in the long term and as a player, we would be doing you a disservice and going against our company commitment to provide the best gameplay experiences. So given this information, sunsetting the game later this year is the inevitable conclusion.

Again, this is not a decision that we approached lightly or without serious thought and examination. We’ve grown with you and the community throughout the years and shutting down the game is certainly not ideal, but necessary regardless.

I also want to let current Vanguard members know that we will be upgrading your membership to SOE’s new All Access membership. Basically under this new All Access plan, you can continue to enjoy membership benefits in Vanguard until it sunsets, only now, you’ll also have top tier access in our other membership games. It is my hope that by upgrading your membership to All Access, you’ll have an opportunity to explore our other games to see if one is a fit for you. For more info, visit the FAQ here: https://forums.station.sony.com/soe…vised-soe-all-access-program-faq.11500063040/

Vanguard has had an exceptional legacy over the last seven years and I cannot thank you enough for your commitment, support and enthusiasm through the years. We will be providing more information on the game’s sunset soon. In the meantime, I will be doing an AMA on Reddit at 3 p.m. today so I encourage you to join in on the conversation with any of your questions.

Work on a fan-run emulator for the game began in 2014 but progress has been slow. As of 2019 an Open Alpha version of the game remains available at VGOEmulator.net.

Welcome to Telon, a vast and ancient world of magic, intrigue and adventure. Facing the challenges of a war torn world, the diverse people here struggle to rebuild their once great civilizations. A fragile alliance has been struck, with the lands set upon by invading forces, the races must band together to survive.

In the north, the sprawling green hills of Thestra are plagued by an unstoppable undead menace. To the south, the deserts of Qalia have been besieged by an elemental threat spawned from the depths of the earth and to the east; inhabitants of the tumultuous jungles of Kojan fiercely battle encroaching otherworldly fiends.

Telon is in desperate need of heroes. Your journey begins now.

Join a community of thousands of players online as you traverse a breathtaking landscape on the back of a dragon as you explore the grandeur of a world designed by the seminal fantasy artist Keith Parkinson. Create and customize your character from 19 races and 15 professions. Combat fierce opponents with a groundbreaking dynamic combat system that forces you to react to your opponents as you tie together devastating combinations of attacks. The challenge awaits the boldest of heroes.