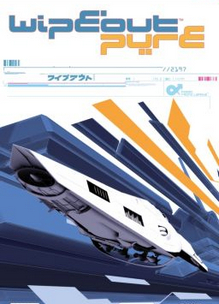 “Pure Speed. Pure Intensity. Pure Wipeout. In the year 2197, only two things matter- Victory and Survival. Pilot the most advanced race craft ever built and battle for complete domination of the FX300 Racing League. The original Anti-Gravity Racer returns with signature Wipeout anti-gravity physics, a high-energy soundtrack, and all new features that only the PSP® can provide!“