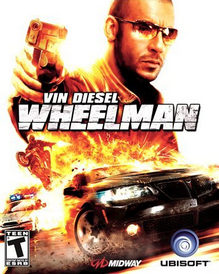 Wheelman was delisted from Steam between February 29th and April 12th, 2012 and from Xbox 360 between March 9th and April 28th, 2012 according to Archive.org captures. Although the game featured licensed appearances from Vin Diesel as well as a small assortment of real world vehicles, it was most likely delisted due to Midway Games’ bankruptcy.

Developer Midway Studios Newcastle was closed in June of 2009 after the Wheelman property was separated from the studio and sold to Warner Bros. in a large acquisition of assets amid the bankruptcy proceedings. Nevertheless, it made it to Xbox 360 as a digital Games on Demand release in 2011 only to be removed less than a year later.

“Combining spectacular Hollywood-style stunts with a gripping storyline, Wheelman provides an adrenaline-fueled, cinematic thrill ride guaranteed to leave you breathless. Vin Diesel stars as an undercover agent and highly skilled driver who must infiltrate the Barcelona underworld to gather intelligence surrounding a covert heist. Posing as a driver-for-hire, he ends up caught in a crossfire of corruption and chaos while trying to stay one step ahead of local law enforcement and rival gangs.“

VIN DIESEL IS THE WHEELMAN: Action film megastar Vin Diesel and his Tigon Studios are again blurring the lines between entertainment mediums, this time collaborating with Midway in the design and production of Wheelman to ensure an edge-of-your-seat gaming experience. Diesel’s voice and likeness will appear as the game’s main character, expert Wheelman Milo Burik.

THE ULTIMATE THRILL RIDE: Designed to play like a Hollywood blockbuster, Wheelman delivers all the rubber-burning, asphalt-churning excitement of the most jaw-dropping high-speed car chases.

OPEN WORLD DRIVING: Go where you want, do what you want, however you want. Choose your own route through the living, breathing city of Barcelona as you complete more than 30 missions and 100 side-missions, or simply drive around and take in the breathtaking Spanish architecture as you seek out all the game’s hidden cinematic jumps and golden lion statues.

REVOLUTIONARY CAR COMBAT: Sideswipe pursuing enemies with Wheelman’s ground-breaking Vehicle Melee car combat. Execute devastating “slam-n-ram” maneuvers in all directions with a simple flick of the joystick. But be careful, because your enemies can do the same. Once you experience Wheelman’s Vehicle Melee, you’ll never want to play another driving game without it!

MAXIMUM MOBILITY: Escape down a narrow alleyway on the back of a tricked-out motorcycle. Drive through an office building to make your getaway. Hop behind the wheel of exclusively licensed vehicles like the Pontiac G8 and Saturn Astra and make your escape in style. Drive it. Trash it. Crash it. You’re the Wheelman, it’s all up to you.

HIT THE PAVEMENT: Even the best Wheelman sometimes needs to get out of the vehicle. Take to the Barcelona streets for on-foot action — but make sure to remember your guns.

Thanks to Moses for submitting this game to the site