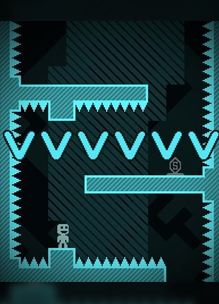 Nintendo removed VVVVVV from the Nintendo 3DS eShop no later than May 2nd, 2016 after the game was found to be used in a new homebrew/security exploit. Creator Terry Cavanagh relayed his hopes for the game’s return in a tweet after the news broke. Apparently having been patched to negate the exploit, VVVVVV returned to the North American eShop on August 24th, 2016 but may not have been relisted in Australian or European territories until later in the year.

The game was once again delisted in February of 2018 as pointed out by a submission to the site. This time the game was removed from the Australian and European eShop as well as PlayStation 4 and Vita in those same regions. VVVVVV later returned to the 3DS eShop but was not pointed out until at least November of 2021. It may have returned years earlier without notice. As of March 2022 it is still not available on PlayStation platforms outside of North America.

There’s something terrible wrong in an alternate dimension! Help Captain Viridian flip to find five crew members, 20 hard-to-reach Trinkets and save a dimension on the brink of destruction. It’s a space opera in the most unique scale with a style that only VVVVVV can bring to you. Instead of jumping, control the direction of gravity by inverting your gravity and allowing Captain Viridian to flip between the floors and ceilings of the environment.

For adventurers who save the dimension, there’s still hours and hours of new gameplay with all-new Player Levels. Test your mettle and see if you have what it takes to beat a collection of levels created by other famous game developers.

Inspired by classic 8-bit days gone-by and now with experience-heightening 3D, VVVVVV will challenge even the most battle-hardened old-school gamers.