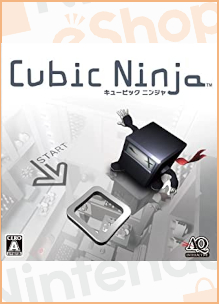 In the days following the reveal of the exploit, Cubic Ninja reportedly became extremely hard to find at retail, with copies of the game selling for up to hundreds of dollars. Nintendo likely removed the game from the eShop shortly thereafter as the developer AQ Interactive was closed and absorbed into MarvelousAQL in October 2011, leaving them unable to patch the game.

Cubic Ninja remains available on physical media in every region it released in.

Welcome to a new world of play, conjoying a little weird play style。
The operation method is very simple! Just tilt the Nintendo 3DS body!! that’s all!
Up and down front, left and right, and the ends diganally。Tilt the Nintendo 3DS body in different directions, boil and tilt again。
I’m sure you will delivery a Wonderful smile and satisfaction to you。