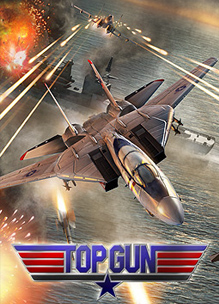 Top Gun  was delisted on Steam on November 24th, 2014. It was likely delisted around this same time on PlayStation 3 and PlayStation Portable. A version was released for iOS but has also been delisted. As Paramount owns the Top Gun property, it doesn’t seem that expired licensing of the IP was the cause for the delistings, although several real-world aircraft are featured in the game.

Top Gun was unfavorably received by reviewers, but more importantly, exhibited a lot of technical problems on all platforms. Given that several of Paramount Digital’s other releases were based on Paramount properties, performed poorly, and were also delisted after only a few years, it would seem that the studio chose to pull these games from sale.

Top Gun’s retail PlayStation 3 release is unique in that it is one of only a few to use a “hybrid disc” format containing both a game and a movie on a single disc. Another example is Days of Thunder: NASCAR Edition which was also published at retail by 505 Games and is also delisted.

Maverick, Goose, Iceman and Viper roar into the sky again in Top Gun. Top Gun is a free-flying air combat shooter where players blast enemies out of the sky in dogfight battles, obliterate ground and air-based targets and show off their extreme flying prowess as Maverick. With their Radar Intercept Officer Goose, players enroll at flight school to go up against the best for Top Gun honors. Following graduation, players fly into the danger zone with other US Navy pilots over the Indian Ocean, where they can shoot down MiGs, defend and attack bases and engage in large-scale dogfight battles. Top Gun also features five multiplayer modes, where up to sixteen players can relive the thrills from the film and interactively experience US Navy combat!