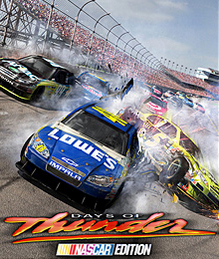 The games were not well received and could have been delisted due to low sales. However, given the timing alongside the delisting of The War of the Worlds, also published by Paramount Digital, it seems likely that the publisher’s transition away from console releases was the cause.

Both Days of Thunder minis and Days of Thunder: Arcade are extinct, and according to forum discussion in 2015, it may be impossible to re-download them even if they had been previously purchased. The only version that may be obtainable is Days of Thunder: NASCAR Edition on PlayStation 3 which was included in a retail Blu-ray combo pack along with the original 1990 movie.

“In Days of Thunder: NASCAR Edition, players join Rowdy Burns’ team as the latest rookie to tear up the NASCAR circuit. With Rowdy as their coach, players learn to hit the pit, upgrade their ride and trade paint with other cars. They can even “drop the hammer” like Cole Trickle for a boost of extra speed. Rowdy Burns is voiced by the actor from the film, Michael Rooker. Days of Thunder: NASCAR Edition comes equipped with twelve NASCAR-sanctioned tracks, including Daytona International Speedway® and Talladega Superspeedway®.

In Days of Thunder: NASCAR Edition, up to 12 people can race to the finish online, log the fastest times on the leader boards, or push themselves to the limit in single-player. There are four different modes – Quick Race, Time Trial, Career, with circuits of varying difficulty, and Derby Mode, where players are encouraged to deal as much damage as they can.“