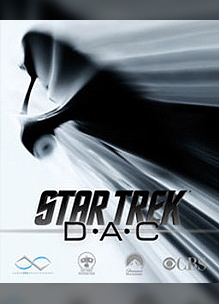 Star Trek: D-A-C was delisted on Xbox 360 in late September of 2013 according to reporting from TrueAchievements.com. It was likely delisted on PlayStation 3 around this same time, however the demo remains accessible on the Hong Kong PlayStation Store and can allegedly still be purchased through the demo. The game was next delisted on Steam in late November of 2014. Several of Paramount Digital’s other releases from the same era were based on Paramount’s own properties, performed poorly, and were then delisted after only a few years on sale. It would seem Star Trek D-A-C was delisted for the same reasons.

Star Trek: D-A-C is a fast-paced, top-down space shooter inspired by the new motion picture. This pick-up and play game allows you and your friends to choose starships (from a list that includes the all-new U.S.S. Enterprise) and battle it out online! Enlist in Starfleet or join the Romulan Empire as you battle with up to 11 friends in game play modes including Solo Play, Online Versus, and Online Co-op. Command the powerful Flagship, the nimble Fighter or the devastating Bomber, each with their own unique capabilities. Choose your side, fire your weapons, boldly go where no man has gone before!