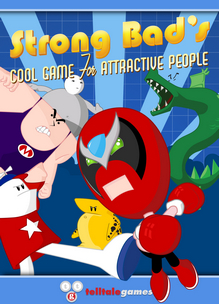 Strong Bad’s Cool Game for Attractive People was relisted on Steam and GOG.com on December 7th, 2020. Telltale Games announced on Twitter the same day that three titles from the “Telltale Archives” were back on sale: Wallace & Gromit, Strong Bad, and Telltale Texas Hold ‘Em.

Strong Bad’s Cool Game for Attractive People was delisted from GOG.com on May 27th, 2019 and from Steam on February 11th, 2020. On the Nintendo Wii it would have been delisted no later than January 30th, 2019 when that service was shut down.

GOG.com Team member Chandra announced in a forum post on May 23rd, 2019 that all titles from Telltale Games would be removed from GOG.com on the 27th. The announcement read:

“You may already know Strong Bad from his regular appearances answering emails and doling out not-so-useful advice on Homestarrunner.com. Now he’s the star of a five episode comedy series, Strong Bad’s Cool Game for Attractive People. With all new storylines co-written by the guys from Homestarrunner.com, you’ll feel like you’re inside Strong Bad’s world. (You may even start to talk like him!) Each episode has a different theme and you get to hang out with with Homestar, The Cheat, Bubs – the whole crew. It’s like a Strong Bad cartoon on steroids. As Strong Bad would say, what the crap are you waiting for?“