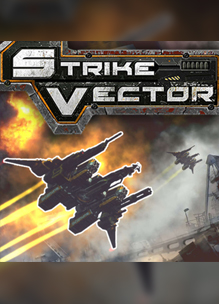 Ragequit Corporation announced on June 30th, 2020 in a Facebook post that has since been deleted (screencap) that the studio was shutting down. As part of this process both Strike Vector and Strike Vector EX were delisted on Steam on the same day. The announcement also stated that the PlayStation 4 version of Strike Vector EX would be delisted “soon” but as of December 2020 it remains available. A transcription of Ragequit’s announcement follows:

As you may have noticed, strike vector and strike vector ex are not available for purchase anymore on steam and soon on ps4. The reason behind this is that Ragequit corporation is closing its door for good. We are really sadneded to a point you can’t imagine and we are conscious that many of you are too. After strike vector Ex we tried to bring new concept but it didn’t really work so we naturally part ways over the years, to the point that the studio didn’t mean anything anymore. That’s also the reason we didn’t communicate much this days. It’s been quite a ride for us, with some really harsh times but also incredibly joyfull ones, thanks to you, the community, the players. So we wanted to thank you very much for all this moments.

For all SV and SVEX owner hopefully you still can play the game on steam and we are waiting answers for the ps4 version. As for this Facebook page, we will maintain it for a short time.  It’s with a lot of emotion that we are writing this lines. We wish you all the best for the future.

Strike Vector is a Brutal aerial FPS that will see you test your skills online against other players in the tradition of Quake 3 and Unreal Tournament. The game offers an hardcore learning curve for those who don’t fear to die a lot at first but who will get a massive rewarding feeling when they will master the game and dominate the battlefield.