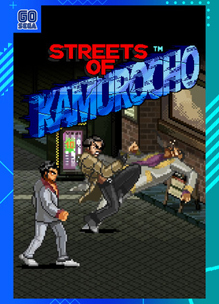 In celebration of SEGA’s 60th Anniversary, SEGA mashed Streets of Rage 2 with the ever-popular Ryu Ga Gotoku Studio’s Yakuza series, and Streets of Kamurocho was born.

Play as two of the most loved characters – Kiryu and Majima – to brawl your way through Kamurocho.

The developers describe the content like this: Contains pixelated beatings, blunt and bladed weapons combat. No blood, though.