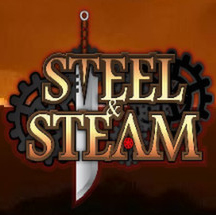 Steel & Steam: Episode 1 was delisted from Steam on March 11th, 2016. The game was already in some state of completion when the team turned to Kickstarter in 2013. Backers pledged nearly four times the goal amount and the game was initially released on April 2nd, 2014 through Green Man Gaming and Get Games Go. In July and November of 2014 it released on Steam (after being Greenlit) and on Desura, respectively

The team has made almost no mention of the game since its release and have not stated publicly why the series was abandoned and ultimately removed from sale. The latest post on the Kickstarter page — made May 30th, 2016 and titled Final Update — is reserved for backers only.

“Steel & Steam takes the best elements from the fantasy JRPGs of old, such as great stories, awesome characters, and classic monsters, and combines them with a touch of steampunk. It’s like taking Lord of the Rings and mixing in the Wild West and you can now join the adventure and get the game in its RPG glory on Green Man Gaming, GameFly Digital and Get Games Go!

Grab your sword, pick up your rifle and put on your coats, and welcome to the world of Steel & Steam!“