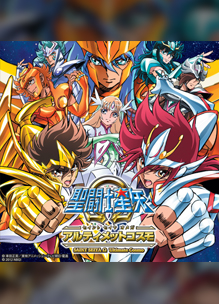 Saint Seiya Omega: Ultimate Cosmo has been delisted on the PlayStation Portable in Japan. The timing of the delisting is uncertain but likely took place between 2015 and 2017, in the typical 3-5 year licensing window. Like other entries in the series the cause for the delisting is uncertain but likely relates to licensing of the Saint Seiya property from the various international partners behind the long-running anime and manga series. The game remains available on physical media.

“Saint Seiya Ω”, which is currently being aired on TV anime, has already become a 3D fighting action! Manipulate the saints who are active in TV animation such as Koga, Aoma, Yuna, Ryuho, Eito, and Eden, and enjoy a hot battle just like an animation! Of course, the legendary Saint Seiya will also appear as an operable character! “Saint Seiya Ω” such as “Microcosm Burst” system that explodes and powers up the microcosm, “Saint Cloth Destruction” system that destroys the sacred clothes (cross) when severely damaged, Ultimate Special Move “Big Bang Attack”, etc. Full of unique battle systems!