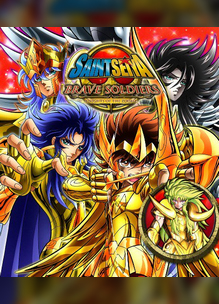 Saint Seiya: Brave Soldiers was last confirmed available on PlayStation 3 in Europe on July 13th, 2016 and in North America on September 26th, 2016. The game was on sale in each territory through these dates and was likely delisted shortly thereafter but may have remained available into 2017. Namco’s homepage for the game went offline in August of 2017 and the game was then confirmed to be delisted in December of 2017 when an anonymous tip was provided to the site.

The cause for the english-language delistings is uncertain but likely relates to licensing of the Saint Seiya property from the various international partners behind the long-running anime and manga series. The game remained available to download exclusively in Japan but was likely removed within a year of the European and North American delistings.

The ultimate head-to-head Saint Seiya fighting game! Battle your way through Mythical Stories and Bestiary from 3 famous Chapters (Sanctuary, Poseidon and Hades) with the biggest Saints selection and over 50 playable fighters. Discover the most complete Saints experience: