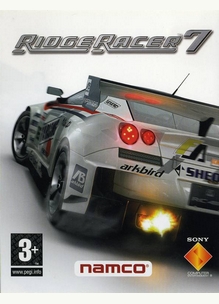 The downloadable version of Ridge Racer 7 was initially delisted from the PlayStation 3 across Europe by the end of 2013. It was last featured in a sale in September of 2013 and does not appear in any further posts from the PlayStation Blog. As reported by commenter Libro though, the game apparently came and went multiple times and was able to be purchased as late as 2016. As of July 2021, some DLC and a demo remain available for the game on the European PlayStation Store but the full version of Ridge Racer 7 is no longer available.

A digital version was never made available outside of European territories. The reason for the delisting is uncertain but could be licensing related or possibly Namco’s decision to simply remove it from sale as the game remains available on physical media.

According to the European PlayStation Blog, Ridge Racer 7 was the territory’s first retail PlayStation 3 game to be sold digitally, albeit several years after its initial release. For a time it was also bundled with the ‘3D License Ver.’ patch that took advantage of 3D televisions.

“Drift racing at its best
Ridge Racer 7 includes a total of 40 machines and 22 exhilarating courses filled with nitrous, fast corners and hairpin turns. With reversed courses, the total grows to 44, the most in the series ever!

Customise your ultimate machine
The brand new machine customisation mode gives players the power to create their dream machine with 375,000 possible visual customisations and 7,150 tuning modifications. Any racing style can be brought to life for the most hardcore or casual gamer

Race your way to the top
In the new career mode, RIDGE STATE GRAND-PRIX, work yourself up to become the best Ridge Racer. The player will be tested to the limit, building a career from the ground up in over 160 races

Online play: In addition to the single player modes, Ridge Racer 7 will produce heated races for up to 14 players. Racers will be able to bring their customised machine online to prove who the ultimate Ridge Racer is. Online features also include a true global ranking system with downloadable content.“

Thanks to nicko051 for submitting this game to the site