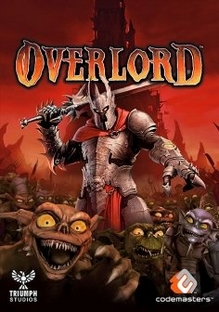 Overlord was delisted from Xbox 360 in December of 2018 according to reporting from TrueAchievements.com. Peculiarly, the demo, DLC for the game, and its sequel, Overlord II, are still available to download on Xbox 360. Both titles were added to Xbox One backward compatibility in July of 2018. In another twist, Overlord II was offered as a Games on Demand download years before the original Overlord. All this combined, the reason for the delisting of this particular version of the game is unknown. As of this writing Overlord remains available on Steam, GOG.com, and directly from Codemasters.

“Prepare to be tempted, mesmerized and thrilled, become the Overlord, how corrupt you become depends on how you handle any given situation. Your actions impact the game world. With incredible power at your disposal and a team of evil minded minions to do your evil bidding, how will you resist the temptation to be incredibly despotic? THINK EVIL, BREED EVIL, CONTROL ALL!“

Control a horde of Minions

Thanks to ml1975 for submitting this game to the site