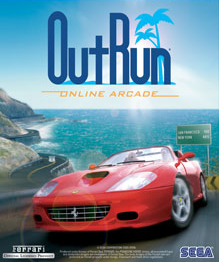 OutRun Online Arcade was delisted from PlayStation 3 in Europe in early October of 2010. The following week Eurogamer reported on the delisting, including the very succinct statement from Sega:

“Due to the expiry of the contract with Ferrari, OutRun Online Arcade will remain offline on PSN but will still be available on XBLA until Dec 2011.”

As stated, the Xbox 360 version of the game was delisted in North America and Europe in December of 2011. Sega’s statement confirms that the delisting was tied to licensing from Ferrari.

“Outrun Online Arcade will not be released on the PlayStation Network in North America, Sega has confirmed to CVG. Instead the colourful update will opt for Xbox Live Arcade exclusivity in the US, while the Europe will receive both PSN and XBLA versions as planned. When quizzed on the reason behind the North American exclusivity, Sega UK declined to comment.“ – PlayStation Europe community forum

“Experience the mayhem and action of OutRun Online Arcade as you test your time, speed, and handling ability, bringing your next-gen skills online with this coin-op classic.

Feel the kick as you put your foot to the floor in one of 10 high-performance Ferraris racing your way across the U.S. with an open top and a girl by your side. Winding roads, beautiful beaches and big city lights-it’s mile after mile of unrelenting acceleration through 15 action-packed courses, all visually enhanced in stunning high definition. Jump behind the wheel for the ultimate arcade racing experience and push yourself on the road as you race up to six others with online multiplayer. OutRun Online Arcade … it’s a beautiful journey!” – Press Copy

An * in the title denotes a page that isn’t fully fleshed out yet.