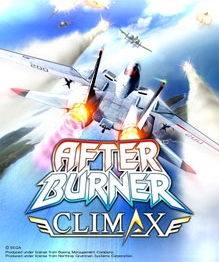 After Burner Climax was delisted from Xbox 360 on December 16th, 2014. It was likely delisted from PlayStation 3 on or near this date. On December 10th, sites began reporting on a tweet from AM2 Producer, Noriyuki Shimoda, who mentioned that the game would be delisted on December 24th.

Just a few days later, Achievement hunting sites XBLA Fans and TrueAchievements (among others) began reporting that the game had been delisted ahead of schedule on December 16th. Like many of Sega’s arcade ports of the era, the delisting is assumed to be tied to licensing, this time of the in-game aircraft including the titular F-14D Super Tomcat from Grumman Aerospace Corp.

“Take to the skies and experience blazing speeds in the world’s fastest fighter jets! The classic arcade game After Burner has now returned for a new generation of gamers. After Burner Climax is fast and frantic action, putting you in the cockpit of the world’s fastest fighter plane. Dodge planes, rockets and bullets while trying to target multiple on-screen enemy aircraft. Built for all skill levels, everyone will be able to take to the air and blaze through a branching storyline and over 20 stages.“