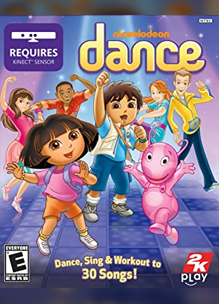 Kids can move, groove and learn to improve as they dance along with their Nickelodeon friends – Dora, Diego, The Backyardigans’, and The Fresh Beat Band. This new dance game is designed to help kids stay physically active as they twist, shake, and shout to original Nickelodeon songs and popular favorites too! Kids can really get their heart pumping with the super cool fitness feature for more heart healthy fun with the Nickelodeon gang!