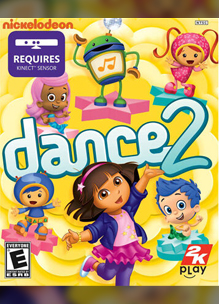 The dance party’s bigger than ever in Nickelodeon Dance 2! Join new characters from Team Umizoomi and Bubble Guppies, as well as returning favorites from Dora the Explorer, The Fresh Beat Band and more as you dance, sing and workout with 30 all-new Nickelodeon songs and routines!