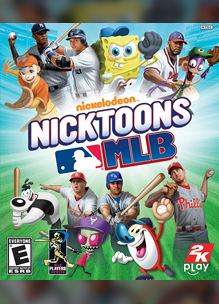 Nickelodeon’s Animated All-Stars take on Baseball’s Best in Nicktoons MLB! The epic showdown that fans of America’s favorite pastime have been clamoring for is on! For the first time, an all-star roster from Nickelodeon’s Nicktoons series including SpongeBob, Dudley Puppy and Fanboy and Chum Chum, will take on players from all 30 MLB teams, delivering not only an unforgettable baseball gaming experience, but also the first to fully take advantage of Kinect for Xbox 360.