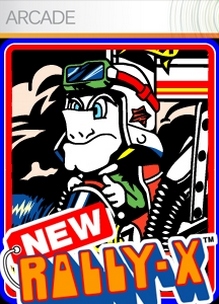 New Rally-X was delisted from the Xbox 360 in North America by the end of January 2019. This coincides with the termination of Nintendo’s Virtual Console and Wii Shop Channel for the Nintendo Wii where New Rally-X was available exclusively in Japan. The game remained available in all other regions on Xbox 360 until March 2022, when the game was reported to the site.

The cause for the delisting is uncertain. Possibilities include changes to Namco’s corporate structure over the years and across the regions. Some older releases are credited simply to ‘Namco’ where newer titles read ‘Namco Bandai Games’, neither of which represent the current entity of ‘Bandai NAMCO’. The split between the American and European divisions may also explain how we end up with a game delisted in some regions but not others, or delistings that are a year or more apart.

Although the game is included in the 2008 retail release of Namco Museum Virtual Arcade the disc does not contain New Rally-X. Rather, it unlocks the downloadable Xbox Live Arcade version which may or may not be accessible as of 2020.

“Collect all the flags while avoiding enemy cars! With new features such as the Lucky Flag, which awards you points depending on your remaining fuel. Collect the Special Flag to double the points of all remaining flags! NEW RALLY-X, the sequel to RALLY-X, was released in 1981. It featured new courses and adjustments to the enemy cars, improving the overall game balance, as well as new graphics and BGM!“

Thanks to SuperMcGuffin64 for submitting this game to the site