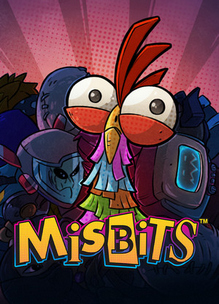 On August 12th, 2020 the team behind MisBits announced that the game’s servers would be shut down and the title (along with its DLC soundtrack) removed from Steam on August 14th, 2020. The team’s statement follows:

With a super heavy heart we are announcing that at ~5pm PDT on Friday, August 14, MisBits will no longer be available on the Steam store page and the servers will come down indefinitely.

We want to thank everyone enormously who showed up to play and who has supported MisBits at any time from our early beta testing days through to now. We appreciate this news might come as a shock so if you want to know more, here’s the deal …

It’s been a rollercoaster journey punctuated with some exhilarating highs like our PAX East 2020 tour and our live DJ set in-game that we are so grateful to have experienced with you all. Unfortunately, there’ve been some lows to deal with too.

The bottom line is game development and service is super challenging and costly – even without the added uncertainty of a pandemic. A free-to-play game of mostly quick play matches, needs to amass a sizable audience of returning players to maintain a fun multiplayer experience. Despite building a stellar core community, we have just not been able to turn that corner and reach a tipping point.

Please know this has been a super hard decision and everyone involved in making, promoting, and supporting the game has been holding out for an alternate ending. So, while the quick timing is not ideal, we didn’t want to finalize the decision before exhausting all options first.

Thank you in advance for understanding how difficult this is for everyone involved. We never wanted to let any of you down. We are grateful to each of you for your support of MisBits. From content creators to fierce competitors – and especially all you duck enthusiasts – we’ll miss you all.

As 3BLACKDOT’s other release, Dead Realm, was also delisted in August of 2020 it seems likely that the publisher was shoring up its resources in support of its remaining title.

ROLL & SWITCH. Roll to find (or steal!) a body with the abilities you want. Think of bodies like your weapon of choice. Lock it in place until you’re ready to swap it out …. or someone knocks you off it! Hundreds of head/body combinations for every play style.

BATTLE. Fun, fast-paced multiplayer competition with giant pickles and exploding chickens! Modes like Deathmatch, Kick Brawl, and King-of-the-Hill are hilarious, unpredictable and endlessly re-playable. Hundreds of bodies and a variety of random, absurd pick-ups bring different abilities and strategies that can turn the tide of any matchup.

BUILD & SHARE . Tinker in ToyBox, our game creation system, to build new games your way or edit existing maps/modes with your rules. Collaborate with up to 7 friends.

Depending on the map/mode, multiplayer ranges from 2-16+ players. Some exploration areas and the building tools can all be experienced in single player.