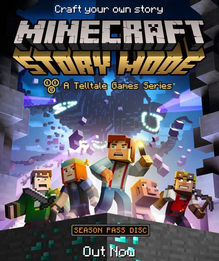 Also on May 31st, 2019, Minecraft.net posted a notice to players who may have purchased the Minecraft: Story Mode seasons advising them to download their content before June 25th.

“The Order of the Stone are legends within the world of Minecraft. Having slayed the great Ender Dragon, tales of Gabriel the Warrior, Magnus the Griefer, Ellegaard the Redstone Engineer and Soren the Architect are renowned throughout the land.

But when the annual celebratory EnderCon gathering goes horribly wrong, it’s up to fan boy Jesse and his friends to take up the heroic reins and embark on a perilous journey to save the world. Do you have the courage to go beyond the Nether and the End in this epic quest?

What you say and do in the game drive the five-part episodic tale of Minecraft: Story Mode. Choose wisely, as your decisions carry over to each episode and can have shocking consequences…”