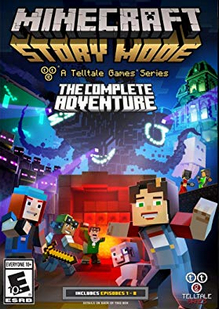 Minecraft: Story Mode – The Complete Adventure was likely delisted from the European Nintendo eShop for Nintendo Wii U and Switch in late April 2019. However, the last Google Cache archives that show the game was available were on March 28th (Wii U) and April 5th (Switch).

As of May 31st, 2019 all other console versions of the game worldwide were confirmed delisted. Also on May 31st, 2019, Minecraft.net posted a notice to players who may have purchased the Minecraft: Story Mode seasons advising them to download their content before June 25th.

“BE THE HERO OF A GRAND ADVENTURE IN THE MINECRAFT UNIVERSE! Embark on a perilous quest across the Over world, to the End, and beyond. While at EnderCon in hopes of meeting Gabriel the Warrior, you and your friends discover that something is wrong. something dreadful. Terror is unleashed, and you must set out on a quest to find The Order of the Stone if you are to save your world from oblivion. With a team of friends at your side, and a troubled land in need of heroes, your decisions – what you say and do – drive the story around you, so choose wisely!”