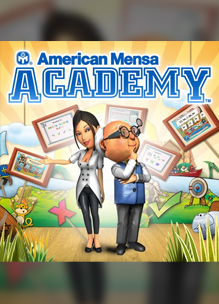 American Mensa Academy (released separately as Mensa Academy, largely across AU, EU regions) was delisted on Xbox 360 between October and November of 2014 and on Steam by June 2nd, 2015. The Nintendo 3DS eShop and European PlayStation 3 releases have also been delisted. Although timing is uncertain they were likely delisted in the same Late 2014 to Mid-2015 time period. Based on the wording in press materials and copyright information on the Mensa Academy homepage, the delisting seems to have been caused by expired licensing from the Mensa organization and Barnstorm Games (then known as Nomisian LTD).

Mensa Academy remains available on Xbox 360 in Canada and Australia, and on PlayStation 3 in North America, for reasons unknown.

Today we’re excited to announce that we’ve teamed up with Mensa and Barnstorm Games to push your brains to the next level. Mensa Academy is designed to get those neurons firing and give your brain the workout it needs. Pitting your noggin against a series of fun mini-games and stimulating challenges, you’ll be testing your brain power against questions endorsed by Mensa (the renowned global high IQ society!).

Academy recruits will be able to pick from Play, Coach and Test modes. Play mode challenges you to take on over 100 replayable levels in five different disciplines – Numeracy, Language, Logic, Memory and Visual. Got a weakness? Not to worry, Coach mode will allow you to hone your abilities and develop skills in key disciplines before you take on Test mode. As you can imagine, this final mode puts all that training to the ultimate test and allows you discover your very own Mensa Academy score.