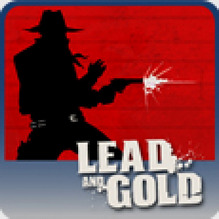 Lead and Gold: Gangs of the Wild West was likely delisted from PlayStation 3 in 2015. In November of 2015 it appeared in a list of new additions to PlayStation Now, the game-streaming service for PlayStation 4 and PC. It appears that the game is now available exclusively on consoles through this service, although the number of active players is likely extremely small. Lead and Gold has remained available on Steam since its release.

“Lead and Gold: Gangs of the Wild West is a third-person shooter that delivers an intense team-based multiplayer experience. Relive the violent era of the Wild West with adrenaline-fueled action and fast-paced gunfights. Engage in gritty battles in beautifully rendered classic Western settings.

Lead and Gold features the unique synergy system, which provides power-ups to encourage co-operation and team tactics. This system accentuates the frantic shooter and objective-oriented gameplay by rewarding players who focus on cooperation and play as a team.“

Thanks to Ragowit for submitting this game to the site